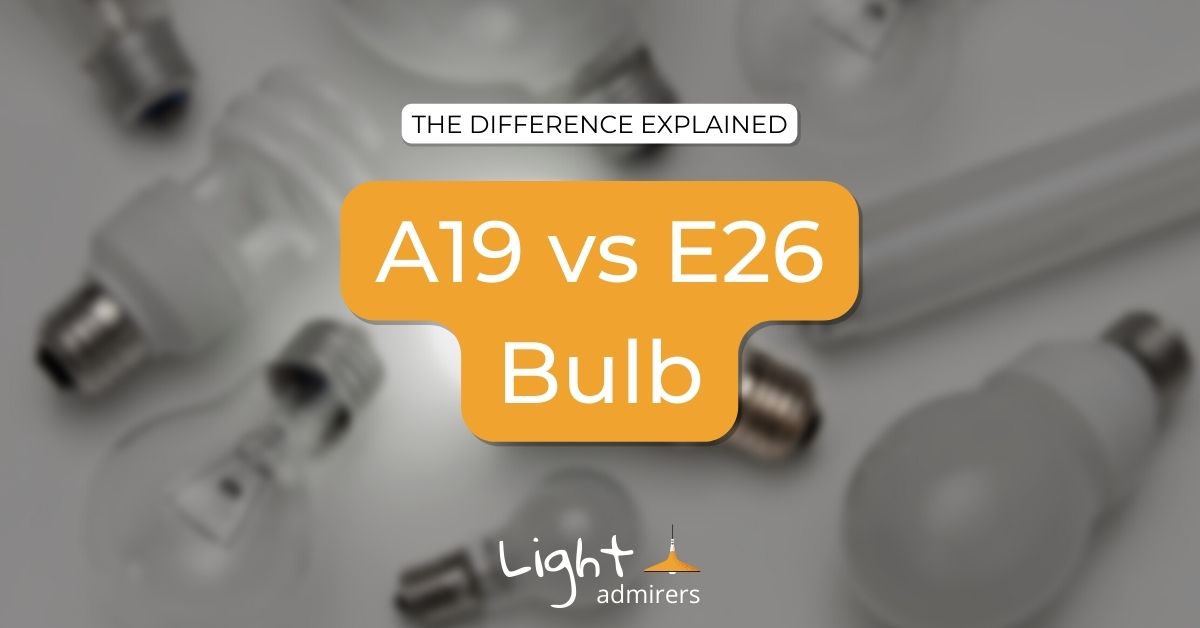 Ever found yourself in a tricky situation when purchasing bulbs? More specifically, you have no idea whether to buy an A19 bulb or an E26 bulb, whether are they the same, and what those letters and numbers even mean.

This article will help you to differentiate those two if there’s any significant difference at all, and thus make your shopping easier. The world of bulbs can be confusing without the proper knowledge.

A19 is a term used to describe the shape and size of the bulb.

In more detail, the letter A in this case means “arbitrary”, which is the most typical shape of the light bulb. The number 19 indicates the size, which in this case is 19/8″ (or 2 3/8″) across.

It is crucial to remember that the designation A19 indicates the bulb itself, but not it’s base.

We will use the term E26 bulb when trying to describe the base of the bulb itself, the part that fits into the socket of the bulb.

The bulb with an E26 base is actually the most popular and most used. The letter E stands for ”Edison”, and 26 refers to the 26 mm across.

Now that we have learned the terminology we know that there’s no rivalry between the A19 bulb and the E26 bulb because they don’t mean the same thing.

Many people think that these two terms are synonymous because most A19 bulbs have an E26 base. That is true but it doesn’t need to be the case and there is a possibility that you will buy the wrong bulb if you’re familiar with only one of the terms.

The thing is, when purchasing the bulb, you need to know both specifications because not all A19 bulbs have an E26 base.

As you know, there are many types of light bulbs. And when you start thinking about differences, you might wonder which one is the best pick for you and your light fixture. However, for this kind of discussion, it’s better to take a look at the basics and learn the terminology.

This way you’ll understand how everything works, and what stands for what and you will minimize the chance of purchasing the wrong item. In conclusion, the A19 and E26 bulbs are two types of light bulbs that are commonly used in households and commercial spaces, respectively, but they don’t mean the same thing.

Sorry, no posts were found.